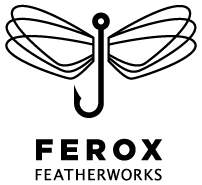 We are often asked about the origin of our logo. It is a mysterious story that stretches back many years to the bottom of a lake in the Scottish highlands.

In 1995, twenty years younger and more inexperienced than today, we were on one of our first backpacking tours in Scotland. Loaded down with our tents and what basic equipment we had at the time, we hiked from one inspiring river and lake to the next feeling free and daring. At the edge of the Loch Assynt we first saw the sign, a hook with wings on either side, coarsely cut into a rough block of rock which lay almost unnoticed among countless others in the water and on which we walked enthusiastically at the sight of the advancing trout. We did not initially think much about it, but the graphic representation of the hook remained in our memory. Only a few years later, when we discovered the same sign a second time, did we begin to take interest.

This time we were back in the north-western highlands, and the first part our trip had been blessed with a lot of sunshine and comparatively little rain. On that day, however, we were surprised by such a violent thunderstorm that we escaped to a nearby old boat house which was not closed, to our great fortune. We sat down on the dusty ground and took off the chill drinking warm tea from our thermoses as our eyes fell on an old wooden boat leaning against one of the walls. On the spot where the name of a boat would otherwise be written, there was a palm-sized version the sign at the Loch Assynt.

Our curiosity was aroused. Immediately we went to the next village to find the owner of this boat. From the pub we were sent to the mixed goods store, from there to the small “Fish & Chips” at the port, and finally we landed at Megan’s, an older lady who operated the post office. It was soon apparent that the fisherman had supposed correctly: the boat had belonged to Megan ‘s deceased husband, who had spent his whole life taking it out on the nearby lake to cast his fishing rod undisturbed and to let the wind blow all bad thoughts and worries across the water and over the mountains.

She told us in detail the simple and yet special story of their love, a story the likes of which probably many people in many places can tell but which nevertheless thrills and satisfies the listener. She told of her husband’s enthusiasm for fly fishing and the day when he came home from the lake extremely happy. He had actually caught a Ferox Trout with a dry fly, though this rare and fabled species was hardly ever seen in this water. Shortly thereafter he immortalized the sign on his wooden boat to mark to the place where he had accomplished this great catch.Where this sign came from, Megan could not tell us. She only knew that her husband was very proud to be able to decorate his beloved boat with it.

We know this story sounds unreal and you may be inclined to smile about the youthful euphoria of our early Scotland phase. The original very simple sign with only one wing on both sides was later graphically elaborated for us to its present form by one of the leading creative agencies from Hamburg (fritz-kola, Mini, Seeed, Deichkind, et al.).