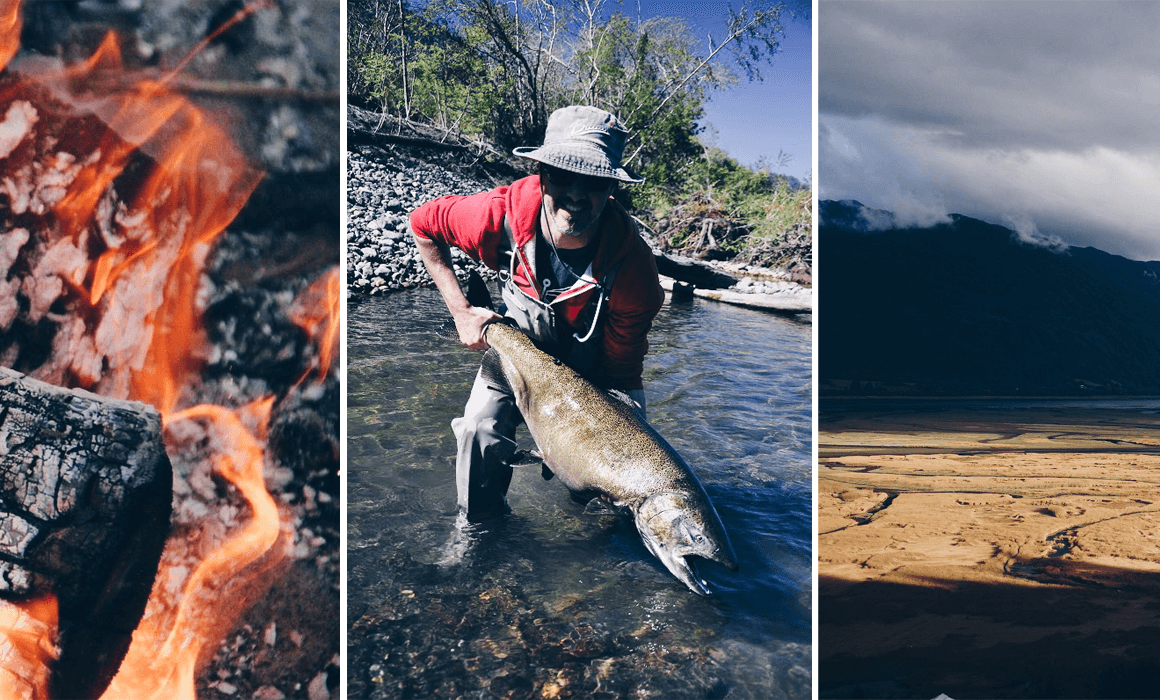 The first cool breeze blew ominously through the valley at dusk when we decided to change the diesel pump on our pickup. We parked on the roadside and shook the inner workings under the hood as if trying to pull the last tooth of an old man.

When the first twinkling stars appeared in the sky, the car started under protest again and we drove with the windows open through a night which rewarded us with the sight of the moon reflecting in the waves of the Petrohué River. We built our camp on the banks,collected firewood and crowned the evening with grilled meat and a bottle of whiskey.

The next morning I woke up to clouds of smoke billowing over me as one of our guys was taking up the task of restoking the last night’s embers to brew his first coffee. The clear, gincolored, blue-green springwater of Lago Santo flowed steadily and the yellow deciduous foliage announced the imminent arrival of autumn. The sun’s first warm rays topped the mountain peaks and began to play with the morning waves. We were at the entrance to the world of volcanoes, rivers, forests and mountains and in the background the enthroned white summit of the Osorno Volcano accompanied us like a constant companion.

After a leisurely breakfast, we assembled our rods and explored the stony riverbed. I let an olive pankorafly drift along the flow’s edge and after a handful of casts the first brown trout jumped artfully into the still-steaming morning air. This day would be perfect.

We decided to follow the lower reaches upstream, filled our backpacks with supplies and stepped unexpectantly through the covered underbrush of the dense river deltas. We fished at bubbling stretches of pebbled benches and mysterious pools, but all was quiet.We took a short break and enjoyed the views of the forested mountains and listened to the sound of nature. I cast a large streamer into the shadow of a bush-lined shore, which promised a deeply flushed gap and thus ideal conditions for bigger fish.

What suddenly felt like a big rock and turned into the vibrant force of a fish that I dared not to imagine erupted in an explosive escape that demanded half of my backing before I was able to react. From that moment began a new dimension of time and space. I fought my way to thorny bushes in hip-deep water, trying to avoid big rocks and withstand the currents as well as possible.

My heart was beating in my throat, but I really wanted to see this fish. On a gravel bank, I slowly regained my backing with sweaty hands. The water surface revealed the imposing back of the King salmon that disappeared downwards with some sharp blows. This game was repeated several times before I managed to get him within our reach, where the King presented himself in full size and turned his laps in the shallow waters. I climbed the embankment with trembling knees, trying to navigate him into the arms of my guys who gave everything, as if needing to tame a wild mustang in the open steppe.

When we finally landed the King salmon with a determined grip on the tail fin, we were overwhelmed by this majestic fish and the unique moment that would unite us forever.
Maybe that was the fish of our lives … but who knows!